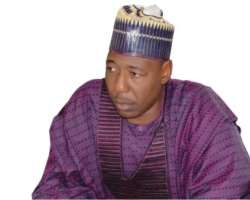 The new Governor of Borno state Professor Babagana Umara Zulum has Thursday directed all the Permanent Secretaries and Cheif Executives of Ministries, Boards and Paratatals to immediately screen and submit the list of their genuine staffing to the office of Head of Service for immediate payment and settlement of all their outstanding salaries and pension arrears .

Similarly, a statement issued and signed by the Head of Service , Alhaji Mohammed Hassan said all these who were retired before four months ago should go to their ministries, departments and parastatals so that their names could be compiled for immediate consideration for the payment of their pension.

However, all the ministries, departments parastatals are to submit their list of staff for salary payment on or before Monday 3rd June 2019.

The statement warned that any PS or CE that submit ghost figure or person will be sanctioned accordingly while the governor said all civil servants who have undergone bio-metric data capture or yet to do so before the Eid -El Fitr sallah celebrations.

The governor gave the directive when Chairman, Nigeria Labour Congress, Comrade Bulama Abiso led other executive members on a congratulatory courtesy call on the governor at the Government House, Maiduguri Thursday.

It will be recalled that his predecessor, former Governor Kashim Shettima for over three years introduced the controversial bio-metric data of all civil servants which led to stoppage of salary payments of thousands of civil servants that were directly or indirectly affected by Mr. Bako led- verification committee.

But putting smiles on the faces of those affected, Governor Zulum directed all Permanent Secretaries in the ministries and heads of Government Parastatalls/Boards/Agencies to immediately compile list of their affected staff/pensioners, bring it on his table on or before Monday 3rd June, 2019 for approval and payment before the forthcoming Sallah.

His words: " As government, we cannot allow some of our civil servants affected by the bio-metric data to continue to suffer without paying their entitlements for the past three years when the exercise was introduced.

"For now, I am not interested in anything called Bio-Metric Data, but to see that even if it is a table payment, all those affected in the exercise should be paid pending when they found to be guilty or collecting different salaries in the name of ghost workers.

" Although, we will not tolerate ghost worker syndrome in the state, because anyone found guilty of such will definitely face the full wrath of the law.

"So, I directed that all Permanent Secretaries in the ministries and heads of Government Parastatalls/Boards/Agencies to immediately compile list of their respective affected staff/pensioners, bring it on my table on or before Monday 3rd June, 2019 for approval and payment before the forthcoming Sallah.

"Civil servants are the engine room of good governance, and so, with or without Bio Metric Data, all those affected must be paid with immediate effect".

The NLC Chairman, Abiso thanked the Governor for considering the sufferings of the affected colleagues as a result of the lingering Bio Metric Data which has lasted for over three years with many affected Civil Servants/Pensioners living from hand to mouth without being paid their monthly salaries or allowances.

He pledged full support and cooperation by NLC to the new government in order to move the state forward.