Army Strongly Warns Saboteurs Of War Against Terrorism In Nigeria 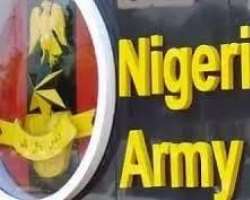 The Nigerian Army (NA), through the Theatre Command, Operation LAFIYA DOLE, has once again received disturbing reports indicating that the war against Boko Haram terrorists is being sabotaged by some stakeholders operating in the North East.

This unfortunate development came to the fore with the arrest of a high profile Boko Haram Terrorist Commander one Mohammed Modu, - (an Amir in the Abubakar Shekau's faction) by troops of 251Task Force Battalion Operation LAFIYA DOLE on Sunday the 26 of May 2019. Preliminary investigations conducted so far, have revealed that the Abubakar Shekau's faction of Boko Haram has been receiving so called "humanitarian support" of food and drugs supplies from some Non Governmental Organisations (NGOs) operating in the North East Theatre.

In the light of these disturbing disclosures, especially as it pertains to serious security breaches by NGOs providing logistics support to terrorists, the NA strongly warns

the affected agencies to desist from compromising Nigeria's national security and war efforts against terrorism and operate in accordance with the extant rules and regulations guiding the operations of humanitarian aid workers, and in line with the guidelines and procedures of International Humanitarian Laws as well as the Laws of Armed Conflict.

The NA wishes to remind the NGOs in the North East and members of the public at large that similar concerns were raised on this same issue previously. Thus, the NA will no longer tolerate such acts of sabotage inimical to the fight against terrorism by any organisation or agency, and will not hesitate to sanction any such recalcitrant organization as appropriate.