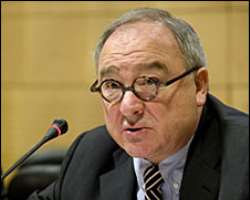 By Jonathan Amos
The European Space Agency's Director General, Jean-Jacques Dordain, will stay on in his post for a third term.

His continued role was confirmed by a council meeting of the Paris-based agency held over the past two days.

It was thought a German national would succeed him, but the German delegation to Esa indicated it did not currently have a suitable candidate and called for Mr Dordain to carry on in the job.

Mr Dordain will now continue through until June 2015.

During his time at the helm, Esa has launched a swathe of Earth observation spacecraft and interplanetary probes.

The agency has also launched many important space astronomy and human spaceflight missions.

This year, the organisation is expected to spend more than 3.5bn euros on European space activity.

The 215th Esa Council meeting also elected David Williams as its chairman. The current acting chief executive of the new UK Space Agency will take the role for one year, starting on 1 July. As chairman, he becomes the most senior member state delegate.