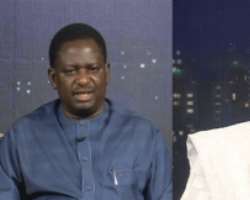 A Chibok Parent, John Bassa, has stated that at least 49 towns in the north east, are still being occupied by Boko Haram insurgents.

He said this on Tuesday during a town hall organized by Channels to assess the performance of the Muhammadu Buhari administration in the last four years.

Bassa who stated that 44 of his relations who were Boko Haram commanders had been killed, and at least 50, were still “active and high-ranking officers of Boko Haram” controlling some territories, maintained that many towns are currently empty as a result of the insurgence.

When asked: “Are you saying that Boko Haram is still in control of some territories in the northeast, from where they plan and execute these attacks – he responded by saying “of course”.

He went further to explain that “out of 52 towns in Gwoza, its only three right now that you can freely live within. (that is, Limankara, Gwoza town and Pulka).

“Gwoza town was liberated by our former President Goodluck, one week before election then in 2015 and the new administration liberated Limankara and Pulka so, 49 towns are still empty with nobody apart from the Boko Haram.

“They are the ones enjoying those areas and you dare not go there”.

In response, the Special Assistant to the President on Media and Publicity, Femi Adesina, said the idea of “infestation and actually controlling a place” are two different things.

Although he sympathised with Mr Bassa for the loss of his relatives who were Boko Haram commanders, Mr Adesina noted that – “that in itself shows that the government is not taking the situation lying low. It is taking the battle to Boko Haram and it is eliminating those who are behind it”.

He insisted that under the previous administration, insecurity was at an all-time-high and cannot be compared to the current times.

“What we saw as at 2015, was that Boko Haram was sitting on the traditional stools of some emirs.

“The emirs had fled and the Boko Haram members were the ones using the palace and controlling the places, Local Govt Chairmen had fled, they were sitting in the offices, they were collecting taxes and tolls and that is not the situation as at today.

“They are prevalent in certain areas does not mean they are the law,” he said.