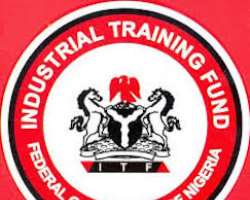 No fewer than 450, 000 youths have been trained by the Industrial Training Fund( ITF) in the past two years in the country with 310 of the graduates from Ebonyi state.

Director General of the Agency, Joseph Ari stated this in Abakaliki, Ebonyi state capital during the graduation ceremony of 7th phase of the National Industrial Skills Development Programme (NISDP) .

He said the 11,000 persons were trained in the phase nationwide in various trades namely: welding and fabrication, tiling, plaster of paris (POP) as well as photography.

Mr Ari said the trades and skills they were trained in were carefully selected based on their potential to directly impact on the state and country in general.

The beneficiaries he said will be given start up kits to enable term begin work immediately and become self employed.

“This is because our monitoring and evaluation of earlier graduands indicates that where training occurs without the accompanying empowerment tools, the results become less impactful. Bearing this in mind, the ITF decided to empower all beneficiaries of its skills acquisition with start-up kits. The graduands of today will be similarly empowered”.

“Owing to our desire to fill the skills gaps identified by the ITF/NIDO Survey, our target this year is to vigorously work to equip Nigerians with lifelong skills in the Agriculture, construction, transport and services sectors that were identified by the survey to have great potential for job creation”, he said.

Area Manager in charge of ITF’s Abakaliki Area office, Ifeyinwa Mary-Ann Osagie raised alarm on the unemployment rate in the country which she noted has continued to rise with the rapidly increasing population of the country despite the efforts by the ITF and the federal government.

“The National Bureau of Statistics (NBS) puts the 2019 figures at 23.1 percent unemployment rate and 16.6 percent underemployment rate. The figures mean that only about 60 percent of Nigerians are gainfully employed. What is even more worrisome is the fact that NBS further predicts a rise in unemployment 33.5 percent by 2020. This is unacceptable”, she lamented.

One of the graduates, thanked the agency for empowering them and promised that they will put all they have learned and the starter packs to good use.

Highlight of the event was the presentation of starter packs to the graduates by the DG represented by Mr James Bamidele and exhibition of some of the works done by the students.