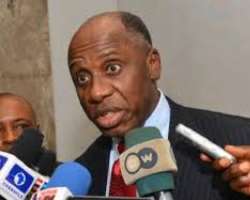 The President General of Ohanaeze Ndigbo, Chief John Nnia Nwodo, on Tuesday, reacted to comment by Minister of Transportation, Rotimi Amaechi, that the Igbo have no chance of suceeding President Muhammadu Buhari in 2023.

Amaechi, a former Governor of Rivers State, had stated that he would have helped the South East bargain for Igbo presidency if they had supported Buhari during the 2019 general election.

He said: “I was the first to do that [promise Igbo Presidency] but I don’t know what the situation is now.

“I don’t know what they will do now for voting against the APC. For refusing to support the APC, they cannot come to the table to demand the presidency slot.

“For people like us in the APC, if the Igbo had come and voted Buhari, they would boldly tell Mr President and the National Chairman of the party that presidency should go the Southeast since the South-south; South-west and North-west have produced president.

“What argument would the Southeast come up with now to convince anybody that they deserve the slot for 2023 president?”

Speaking in Imo, at an event ahead the inauguration of Emeka Ihedioha as Imo governor: Nwodo said: “For those who deride Igbos, saying we can never be President on account of our voting; we don’t want to be President in a skewed and unjust federation.

“We have demonstrated that unless you rig igbo votes will determine who will be President, they now know that our votes are size able.”

Nwodo reiterated that the only option left to take Nigeria off her myriads of woes is to restructure the country and operate a true federal system.

The Ohanaeze boss said that the argument for restructuring as a solution is further strengthened by the fact that this present system has failed as we can no longer sustain our country economically if this system continues.

“Today, we are spending 69% of our national revenue to service our loans annually without retiring the Principal, today, we have 12m youths out of employment, the quality of our education is failing drastically due to lack of teaching aids and qualified personnel, the security of life and property has never been as inadequate and unreliable as it is today.

“So long as the Nigeria federation continues to run as a unitary system of government imposed by the military, which treats the South East as a conquered minority and denies it access to regional self government and direct control of its natural resources, so long will the agitation for separatism continue in the East”, he said.