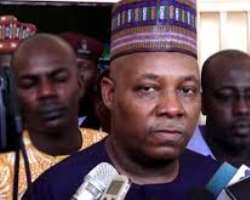 A statement issued by the Secretary to the State Government (SSG) Alhaji Usamn Jidda Shuwa Saturday said the Govenror directed all the State Commissioners to immediately hand over the affairs of their respective ministries to their respective Permanent Secretaries on or before Tuesday, 28th May, 2019 unfailingly.

It also thanked the state commissioners for their services to the state and wished them success in their future endeavours.

The statement further urged the Permanent Secretaries to liaise and cooperate with their respective commissioners to ensure proper handing over of the affairs of their ministries.

It will be recalled that just as the presidency did, the commissioners since they were appointed 4 years ago in the second tenure of the Governor, they have not been dropped/replaced by the govenror until now.