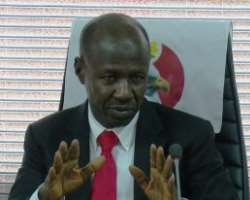 The Economic and Financial Crimes Commission has instituted a probe into the activities of a syndicate ripping  Nigerians off under the guise of safeguarding their nomination for President Muhammadu Buhari's next cabinet.

SUNDAY PUNCH learnt in Abuja on Saturday that the syndicate had successfully fleeced a number of Nigerians across all walks of life of millions of naira in the name of “processing fees.”

The anti-graft agency's action was triggered by a petition, dated May 17, 2019, sent by one of the victims.

It was learnt that the syndicate forged a letterhead and created email addresses of the office of the Vice-President,  National Security Adviser as well as the State House Protocol Department for this purpose.

A petition to the EFCC by one of the victims (name withheld), who is a prominent academic from one of Nigeria's leading second generation federal universities, gave an insight into the syndicate's mode of operation.

A member of the syndicate normally contacts a potential victim by telephone to confirm their identity after which the victim is told that they had been nominated for a cabinet position and is informed the information must be kept secret.

The potential victim is then asked to send their Curriculum Vitae, and is then sent a nomination form bearing a letterhead and seal of the 'Presidency'.

A day or two after the form is signed and returned via email, the victim receives an email supposedly from the State House Protocol Office acknowledging receipt of the completed form.

The potential victim is then informed in the same letter that their file had moved to the office of the National Security Adviser, having been approved by the protocol office.

He is then given the name and telephone number of a member of the syndicate who is said to be the Chairman of the Security Clearance team for further directives.

At this point, the victim is advised to comply with the directives given by the said chairman within 48 hours or risk being dropped from the list.

An excerpt of the letter entitled: 'Request To Reach the National Security Adviser's Office (sic) for Clearance', obtained by SUNDAY PUNCH, reads, “This is to officially acknowledge the receipt of your completed nomination form and to also inform you that your file has moved to the office of the National Security Adviser for security clearance having being approved by my office.

“Besides, you are being screened for a position among the portfolios of the federal executive council on the directive of the President. This is an official process to verify nominees for the prospective unity government.

“I crave your indulgence to kindly contact the Chairman, Security Clearance Committee Team whose name and contact appear below for directives bearing in mind that you have 48 hours to be cleared or declined. Mr. Sunday Iduh (Chairman) — 08104021735.”

The letter was signed by Senator Lawal Abdullahi Kazaure, State Chief Protocol to the President.

Once the victim contacts the so-called chairman, the fleecing begins. The victim is then asked to provide funds to obtain clearance from security agencies as well as the Senate.

While narrating his ordeal, a victim, who spoke on condition of anonymity for fear of his safety as well as not to jeopardise EFCC's investigations, said he was contacted on Wednesday, May 8, 2019 by one Mrs Blessing Agbana, purporting to work for the Chief of Protocol to the President.

He gave her phone number as 0810442229.
“She then said she would forward an email address to which I should urgently forward my CV. My true caller check confirmed that name. These are the emails: [email protected] or [email protected] Dr. (Mrs) Blessing Agbana.  I forwarded my CV, which was acknowledged. A nomination form was forwarded to me. I completed the form as above.

“I was asked to check my email for a message indicating that my nomination had been approved. I contacted Mr. Sunday Iduh as indicated on 08104021735.

“He (Iduh) said I needed to pay N30,000 per security agency as administrative charge. I said that was impossible since that was a Friday. He offered to facilitate if I could quickly pay the N150, 000 into the account of Jude Philips, the secretary of the screening committee at FCMB 5706723016.

“I paid and he acknowledged receipt and that he had deployed his men immediately. Later, I received an email that I had been cleared with the document below.”

He added, “Mr. Roland Aga, with phone number 08155884850, called  that he had to go to the Senate to get the time for appearance. He called back after the 10am appointment to request that we on the list were requested to express appreciation before screening.

A retired official of the Bureau for Public Service Reforms, who was also approached by the syndicate, was saved by his instincts.

A source familiar with the case said, “When they called him with information about his purported nomination and he needed to follow their instructions, he told them he didn't ask to be nominated, and that to ask him for money for processing was inappropriate. The conversation ended there. Only God knows how many others  have fallen victim and are unwilling to take the matter up because they are too embarrassed.”

When SUNDAY PUNCH called Mrs. Agbana's telephone, a voice message said the number did not exist.

The same response was received when our correspondent called the telephone numbers of other members of the syndicate.

A security official told SUNDAY PUNCH in confidence that the “appointment scam is the biggest scam in town at the moment.”

He however promised that “we will get to the bottom of it.”

Spokesman for the EFCC, Tony Orilade, said, “We don't discuss ongoing investigation on the pages of newspapers.”