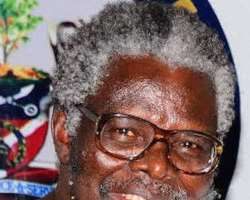 The word, “revolution”, is currently enjoying a political and lexical rehabilitation with Nigerians, especially the youths. Though still seen as treasonable, “revolution” is no longer easily associated with evil or lack of patriotism. The type of rehabilitation that “revolution” now enjoys reminds me of the euphoric celebration of “new democracy” in the last decade of the 20th century, allegedly following the collapse of Communist

Party-led governments in Eastern Europe and the disintegration of the soviet Union. Unlike a “coup d’etat” against which the youths still react negatively—or at best, with mixed feelings—“revolution” no longer evokes fear. This piece is inspired by the need to look again at the word, what it means in politics and history and what Nigerians, especially the youths, now understand by it.

After a deliberately careful exercise of search and review, followed by acritical reflection, I may report as follows: Used as a political term, shed of all ideology—or shed of ideology as far as possible—and also simplified as far as possible, without tampering with its essence, a revolution may be understood as one or aggregate of the following three descriptions: “an attempt, by a large number of people, to change agovernment of a country, especially by violent action” or “a political upheaval in a government or nation-state characterized by great change” or “a forcible overthrow of a government or social order in favour of a new system.”

If the restriction on ideology is relaxed, Marxism immediately appears and defines a revolution as a “political class struggle that has led to, or is expected to lead to the establishment of socialism and—eventually—to the emergence of a classless society.” The relaxation on ideology will also release a flood of negative attributes for the description of “revolution”: illegal, criminal, treasonable, unpatriotic, devilish, etc. A “counter-revolution,” stripped of ideology, is also a “revolution,” but a “revolution opposing a former one or reversing its results”. A coup d’etat, on the other hand, is much easier to define: it is a “sudden, illegal and often violent change of government”.

We are now strengthened to make the following two points: First, missing from the various definitions of “revolution” and “coup d’etat” is a categorical inclusion of the element of violence. Put directly: though most of the revolutions and coups d’etat that modern history has so far recorded came with violence, the latter is not an essential element of either “revolution” or “coup d’etat”. In other words, strictly speaking, a revolution or coup d’etat can take place with or without the use of violence—by the executors.

development, pass through a revolt, a coup d’etat, an insurrection or an insurgency. But a revolution cannot be reduced to any, or a combination, of these.

From the many revolutions that have occurred in Africa and beyond in the last 30 years, we may pick out two—one in Africa, the other in Eastern Europe—as illustrations. The reason for choosing them will become implicit. First illustration: Tunisia is an Arab-majority and Muslim-majority North African country. Its population in 2010 was about 10.5 million. Late that year, a young Tunisian man, an unemployed graduate, was publicly selling vegetables in a small village to make some money to feed himself and his family whose “bread-winner” he was said to be.

As he had no official permit to undertake this enterprise, he was arrested by the police. The punishment was swift: his vegetables were confiscated. He begged and begged, pleaded and pleaded. But the immediate authorities did not change their minds. He then appealed to all the higher authorities to which he had access. Still, no reprieve: his vegetables remained confiscated.

In frustration, the young Tunisian withdrew from sight. He soon re-appeared with some quantity of fuel. He drenched his body with it, and publicly set himself on fire. He died in hospital after a couple of days and instantly became a martyr. His martyrdom threw open the “gates of hell”!

Tunisian youths poured into the streets! So began a popular revolt which quickly spread to several North African and Middle East countries including Egypt, Libya, Oman, Bahrain, Jordan, Algeria, Palestine—and even Iran, a non-Arab majority country. That wave of popular revolts is now known to history as Arab Spring.

The Tunisian government responded by ordering its security forces to disperse the rioting crowds and put down a threatened rebellion with any level of “show of force” and actual violence necessary to restore “law and order”. The security forces obeyed; but the protests intensified and continued to spread across the country. Suddenly a couple of things whose sequence was not very clear to the protesters—or even the observers and sympathisers—began to happen: conflicting orders seemed to be emerging from the ranks of armed institutions of state; administrative institutions appeared to have abandoned power and responsibility; and the Tunisian president fled the country! For a brief moment it appeared that the “people” had won! But it quickly dawned on UNORGANISED Tunisian masses that power had fallen into the hands of—or had been collected by—a military junta constituted within the armed forces of the Tunisian state.

Second illustration: Romania is a country in southeast Europe. In December 1989 the country was officially socialist and was governed by a Communist Party. The executive president was a man called Nicolae Ceausescu, a decorated liberation fighter and prisoner-of-war in his country’s war against Nazi Germany in the Second World War. The tragic drama, which is the subject of my short story, began on Friday, December 15, 1989 in Timisoara, a Romanian city close to the Hungarian border. On that day a detachment of Security Police came to the house of a radical priest to arrest him. Some of the parishioners resisted the officers by forming a ring around the priest’s house.

Alarmed, the police went back for reinforcement. The priest’s defenders also summoned other church members and ordinary Romanian citizens. On the way to the priest’s house, the “defenders” dismantled police checkpoints.

The police ran away. Soon the small group of “defenders” became a crowd, and the crowd spilled into the town. On hearing of what was happening in Timisoara, more and more people from more and more villages, towns and

cities joined the protest. Shouts of “leave the priest alone!” turned to “We want bread!” and finally to “Down with Ceausescu!” Romania’s 1989 popular uprising had begun!

On Friday, December 22, Ceausescu called a rally of his supporters at the party headquarters in Bucharest, capital of the country. He addressed the people from the balcony. Just a few minutes into his speech the crowd started shouting and, shortly after this, began to throw stones at their president! Ceausescu was shocked not only by the people’s action but also by the attitude of his security forces— the army, in particular: soldiers did nothing while the president was being stoned!

Ceausescu withdrew into the building. Moments later a helicopter took off from the roof of the building. The president had abandoned power and was on the run! The people took over the building. But almost immediately, an announcement came: the deposition of President Nicolae Ceausescu and his government and the formation of Front for National Salvation (NSF), made up of leaders of ORGANIZED fighting groups—civilian and military, but outside the Romanian state.