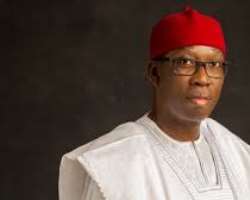 As Delta state governor, Mr Ifeanyi Okowa, prepares to be sworn in on May 29 2019, his Political Adviser, Omimi Esquire, has assured Deltans of more development in the state.

In a statement in Asaba, Friday, Omimi Esquire said that judging from the governor's sterling performance in his first term which winds down in a couple of days, there is every clear indication that more dividends of democracy would come the way of Deltans.

The Political Adviser to the governor noted that the overwhelming landslide victory of his boss during the just concluded Governorship elections clearly affirms the unalloyed confidence reposed in the Governor by Deltans irrespective of ethnic affiliation, to improve on their social and economic well being.

He charged Deltans to extend the support they gave the governor during his first term to his second term by praying steadfastly for him and remaining law abiding.

While thanking the governor for finding him worthy to serve as Political Adviser, Omimi affirmed his resolve to remain committed to the Okowa administration's SMART Agenda.

He described the Governor as a pace setter and efficient manager of men and resources , noting that the Governor,s pragmatic leadership style has made the PDP well accepted to Deltans.