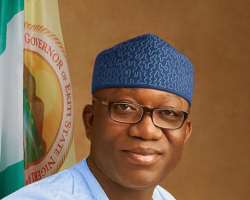 Ekiti State Governor, Dr Kayode Fayemi, has hailed Friday’s Supreme Court judgement that affirmed him as the validly elected Governor of the state, saying that the ruling by the apex court not only confirm the validity of his election, but also voided the controversial White Paper that purportedly barred him from holding office.

Governor Fayemi also told his petitioner and candidate of the Peoples’ Democratic Party, Prof. Kolapo Olusola-Eleka to focus on the progress and development of Ekiti State, now that he has exhausted all available legal means.

Fayemi who spoke with newsmen in Ado Ekiti, shortly after he was welcomed by a crowd of jubilant youths said he is ready to work with the former Deputy Governor provided that Eleka is ready to serve Ekiti people alongside him.

“I have said this repeatedly, Eleka is an illustrious son of the State, he was Deputy Governor for four years. To the best of my knowledge, I don’t know him closely but from what I read about him, I’d like to think he is a decent Ekiti person and having pursued his case to a logical conclusion, I would hope that he would now concentrate on Ekiti party, not APC, not PDP but ‘Ekiti Party’ and when you belong to Ekiti party, you serve Ekiti people, and whatever he can do to serve with us, I will be happy to work with him”, Fayemi said.

Speaking on the verdict, Governor Fayemi said the Supreme Court has confirmed that the process that led to his election as governor was compliant with the Electoral Act and that the outcome of the poll was the wish of Ekiti people.

He said his administration would now have to fully concentrate on governance having overcome all litigations which may distract it from facing the act of governance.

Fayemi said: “I give God the glory for finally bearing testimony to what we have known that the election in Ekiti was free, fair and credible and it was one of the most credible primaries ever held in the history of party primaries in our state, and the so called White Paper that purportedly indicted me was meant for nowhere but a trash can and the process that culminated in the victory was nothing but the wish of Ekiti people.

“The Supreme court just confirmed what every objective observer of that election already knew and the foundation trial court did a human job, in my view, of making it absolutely clear that the election in Ekiti was in all ways a credible election which was substantially compliant with the electoral act.

“But then, we still must thank the Supreme Court for putting a finality to these endless litigations that we have been dealing with, as this affords us the opportunity to concentrate on why we are here.

“We have been working on, regardless but there is no question that distraction is bound to happen when we have endless cases in court.

“What the Supreme Court has done for us as a state and as a people is to save us the trouble to have to worry unnecessarily about what the trial court or appeal court or the Supreme Court was going to do about our case. Now we are faced with the business of governance”, Fayemi said.