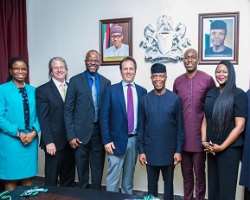 Microsoft Corporation visited Nigerian Investment Promotion Commission (NIPC) on Friday May 18, to discuss their plans for Nigeria. The Microsoft delegation was led by the Executive Vice-President of Gaming, Phil Spencer and was received by the Executive Secretary/CEO of NIPC, Ms Yewande Sadiku.

The company plans to spend more than $100 million over five years and hire 100 engineers by the end of the year, and 500 by 2024. A mixed reality team of 10 has already been hired in Lagos.