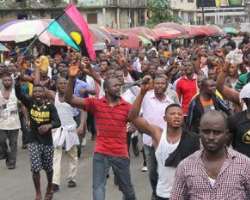 An Enugu East Magistrate's Court presided by Magistrate A. N. Chioke has remanded 140 members of the proscribed Indigenous Peoples of Biafra (IPOB) over an alleged treason.

The defendants, who were brought to the court in three 608 buses and one 18-seater bus, were said to have conspired to commit treasonable felony.

They were, however, arraigned outside the court for about two hours as the court room could not accommodate them.

The offence was said to be punishable under Sect. 516 (A) of the Criminal Code CAP C38, Laws of Federal Republic of Nigeria 2004 as applicable in Enugu State.

When the charge was read, the defendants pleaded not guilty.

One of the defence counsels, Osita Abalu, applied for their bail on the grounds that there was no evidence to back up the charge.

Mr. Abalu said the prosecution had failed to provide probable cause why the defendants should be remanded in court in line with Sect. 234 of the Administration of Criminal Justice Laws (ACJL) of Enugu State, 2017.

He urged the court to exercise its powers under Section 225 of the same law and grant bail to the defendants.

Mr. Abalu said though the offence for which the defendants were charged was punishable with life imprisonment, Section 88 of the ACJL, the Magistrates Court was qualified to grant bail.

He also urged the court to order the release of the four buses conveying the defendants to the venue of the burial.

Counsel to the 107 defendants, F.C. Okeke, told the court that it was ridiculous for the prosecution to claim that the defendants attempted to overthrow President Muhammadu Buhari.

Mr. Okeke said the defendants were arrested on their way to a burial and wondered how that could translate to over throwing the government.

“President Muhammadu Buhari is in Abuja, Gov. Ifeanyi Ugwuanyi is in Enugu while the defendants were arrested in Nsukka,” he said.

The counsel described the charge as trumped-up and meant to deny the defendants of their fundamental rights.

Mr. Okeke said the prosecution deliberately brought the matter to the Magistrates Court just to punish them.

“An accused person cannot be brought to a court when such court has no jurisdiction to entertain the matter just to punish them.

“That is the essence of the ACJL of Enugu State. The law does not want an innocent soul to suffer.

“The defendants were arrested with no evidence; not even a razor blade. They were going to a burial,” he said.

Mr. Okeke urged the court to grant them bail in the most lenient means.

However, the prosecution counsel, Paschal Nwachukwu, urged the court to discountenance the bail application.

Mr. Nwachukwu said the law empowered prosecutors to bring defendants to a magistrate for remand.

He said a court could not grant bail in a matter it had no jurisdiction.

In her ruling, Mrs Chioke declined jurisdiction in the case and remanded the defendants in Enugu Prisons and urged the defense team to make application in the appropriate court.

The magistrate ordered the release of the four vehicles to their owners on bond and on the provision of proof of ownership and particulars.

“The charge the defendants are remanded for is treasonable but the prosecution did not list any exhibit of weapon of warfare against them.

“The only document against them before the court is the charge sheet. This looks to me like a trumped up charge,” Mrs. Chioke said. (NAN)