.......AS HE EMERGES NGF CHAIRMAN
By Yinka Oyebode 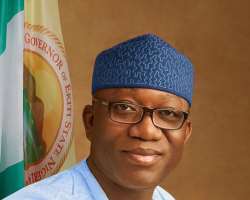 Ekiti State Governor, Dr Kayode Fayemi has stated that the Nigeria Governors' Forum (NGF) under his watch will address all issues that come its way “as amicably as possible in the overall interest” of the country.

Fayemi who spoke moments after he was unanimously elected as the Chairman of the Nigerian Governors' Forum on Wednesday night, said he is ready to build on the commitment of his predecessors by ensuring that States have a strong partnership with the Federal Government as federating units.

He explained that his election as chairman and Sokoto State Governor, Aminu Tambuwal as Deputy Chairman showed that the Forum represents Nigeria regardless of political persuasion.

The new chairman pledged that States would be strengthened to make them become more dedicated to the citizens; adding that this will also become beneficial to the country at large. “My colleague, Aminu Tambuwal and I are delighted at the choice made by our colleagues this evening by consensus, the confidence reposed in us and in accepting this onerous responsibility that has been handed over to us, we promise our colleagues that we will step into the big shoes that Governor Yari will be leaving behind and build on the success story of this forum right from Governor Abdulahi Adamu through Governor Victor Attah, Lucky Igbinedion, Bukola Saraki and Governor Rotimi Amaechi before Governor Yari who so selflessly served this forum in the last four years”.

“We will build on this commitment with strong partnership with the Federal Government as federating unit and thrash out issues as amicably as possible in the overall interest of our country.

"This is something that all parties of different persuasions have done and as you can see, the leadership comprises myself from the majority party, the ruling party and Governor Aminu Tambuwal from the Peoples Democratic Party. What is most important is that this is unanimously chosen and we represent Nigeria regardless of our political persuasion.

"What we are going to do will be in the overall interest of our country in ensuring that our states are continuously strengthened; our country derives the benefit of strong dedicated states to our citizens and our partnership with all arms of government – federal government, the legislature and the development partners working with us in the overall interest of Nigerians”, the governor said.

Speaking further, Governor Fayemi hailed Nigerians for the 20 years of unbroken democratic rule in the country, saying that it is an affirmation that Nigerians love democracy and are determined to make it work.

According to the communiqué issued at the end of the meeting and signed by the outgoing Chairman of the Forum, Governor Abdul’aziz Yari, the Governors, aside electing new leaders, also resolved to hold a meeting with President Mohammadu Buhari to find a lasting solution to security challenges facing the country, among other things.