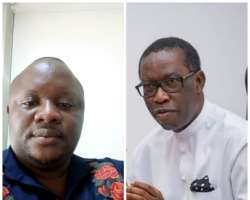 Delta state governor, Ifeanyi Okowa, has been urged to reward loyal Ijaws of the state with more appointments.

Chief Comrade Akiefa Frank, Ijaw Youth Council (IYC), Chairman Western Zone made the call ahead of the second tenure, noting that Ijaws are always faithful, supportive and loyal to him and Peoples' Democratic Party (PDP), in every elections in the state.

"We are calling on Governor Okowa to reciprocate our loyalty and faithfulness to him by giving ljaws more appointments in his second tenure, we expect our Excellency to at least appoint two or three Commissioners in Burutu Local Government as the biggest Local Government Area in the state.

"Our Excellency should also give ljaw people more appointments as Board Chairman/Chairperson, SA and SSA in his tenure for always standing by him and voting massively for him in all his governorship elections".

Chief Frank, appealed to Governor Okowa to consider and appoint ljaw person in the Warri three Local Governments as Commissioners, stressing that there is nothing to write home about in those areas under Warri North, Warri South and Warri South-West Local Governments.

Hear him: "They have been treated like third class citizens since the inception of those three Warri Local Government Areas. So we are begging our dear Governor to consider and appoint ljaw person as Commissioner this time for fairness, justice and peace".

Speaking with newsmen in Warri, Chief Comrade Akiefa Frank said, "l sincerely appeal to our dear Governor the "Road Master" to focus on Egodor road because that road is a dead trap, and he should complete the Ayakoromo bridge and the road that leads Esanma to Ezebiri.

Speaking further, he said, the government should also look at the deplating state of Gbekebor and Tuomo communities. And the House of Assembly members-elect should focus on their promises to the people they are representing. Most especially Hon. Asupa Forteta who's representing Burutu North to know the dying state of Gbekebor town and ward nine (9) where he Asupa comes from.

Governor Okowa should reward the efforts and support he received from the ljaw people in the riverine communities since 2014 starting from the governorship primaries by providing the basis social amenities, such as electricity, link roads across the communities, portable drinking water, good modern markets, good healthcare center with health facilities and good education with quality teachers to teach the students.

"I know Mr Governor will hear the cry and plea of the ljaw people and keep to his promises to do something, he always keep to his words as a listening governor", he added.