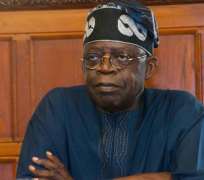 The National leader of the All Progressives Congress (APC) Asiwaju Bola Tinubu has been described by the Coalition of Yoruba Youth Congress, as the modern day 'Afonja' over his latest attack on Nigeria's former President, Chief Olusegun Obasanjo. The group said it is now clear to the Yoruba people, particularly the youth, that Bola Tinubu has finally dumped his title of the "Asiwaju of Lagos" and have completely adopted the Jagaban of Borgu instead, judging by his recent stance on the state of the nation, particularly the many attacks on Yoruba people and settlements, across the southwest part of the country.

The group while reacting to a statement credited to presidential spokesman, Garba Sheu, where he quoted the former Lagos State governor of attacking former President Obasanjo at a gathering with President Muhammadu Buhari in far away Saudi Arabia, said it will no longer sit back and watch Bola Tinubu, insult Yoruba elders just for the sake of pursuing his ambition of succeeding President Buhari as Nigeria's President.

The group's statement signed by Prince Ayodeji Adesida, said "History should remind Asiwaju Bola Tinubu, that Afonja thread this path before him, with the hope that Alimi will make him the king. But where did he end up? We are seriously waiting for where this will end Bola Tinubu".

The statement reads, “The APC should be reminded that we are taking serious note, of all forms of conspiracies of by him, and his co-travellers of Yoruba extraction in the APC, and their deliberate silence, at the time, that the Buhari led administration's aided Fulani militias, are daily overriding our land abd subjecting our people both old and young to all forms of harassment and attacks; all with intent of forcefully taking our accenstral land, while Tinubu and his cohorts remain cowardly silent".

“As a generation of young Yoruba people, we stand by the statement of former President Olusegun Obasanjo, and it is now clearly audible to the deaf, and visible to the blind, that the Buhari administration is aggressively pursuing an agenda to completely "Fulanise" our country and our region of the southwest, remains their prime target. Events of the last few months have confirmed to us, that the Bola Tinubu led APC leadership in the southwest are fully in bed with this invading jihadists, hence, their silence and endorsement of the ongoing rampages across Yoruba land, which the Federal has continuedto deliberately ignore".

“It is shameful beyond imagination that rather than standing up in defense of our people at this trying moment, like former President Obasanjo and other patriotic Yoruba leaders have been doing over the past months, Tinubu has chosen to stand by our oppressors, and now leading the charge in the well choreographed mission of attacking Yoruba leaders and other patriots who question the atrocities of the Buhari's regime."

“Even though the idea of integrity and respect for humanity might be alien to Bola Tinubu and his co-travellers, we wish to remind them, that it is within the fundamental rights of former President Obasanjo and other Nigerians, to speak out whenever the lives of the ordinary citizens are under threat and unlike Tinubu, they cannot afford to overlook such transgressions.

"We therefore use this medium to inform Bola Tinubu that Yoruba people will no longer sit back and allow his group of opportunists to disrespect our leaders or to use them to score cheap political goals.” the statement concluded