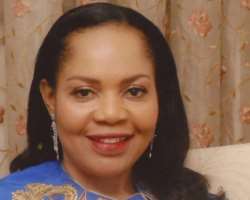 North East Women and Youth Groups led by North East Women and Youth Initiative For Good Governance have added their weight to support Hon. Onyejeocha Nkeiruka's candidacy for the 9th Speaker, House of Representatives by joining other Nigerians to express their dismay over planned gimmicks by the APC leadership in collaboration with the APC National Leader, Senator Bola Ahmed Tinubu to impose Hon. Femi Gbajamila on the members of the lower chamber of the national assembly as the 9th Speaker of the House of Representatives.

Addressing journalists Saturday at a joint press conference in Maiduguri held at Desert View Suite Conference Hall, the Chairman , Babakaka Bukar Zanna said," We would like to join other concerned Nigerians for we are dismayed and perplexed by the determined efforts of some political merchants to undermine the sovereign sanctity of the National Assembly to set the country back in its quest for national integration and progress by needlessly fomenting disaffection among the elected distinguished and honourable parliamentarians of the 9th Assembly."

"We are specifically worried over the undemocratic purported endorsement of Rep Femi Gbajabiamila as sole candidate for the post of the Speaker of the 9th House of Representatives by a conspiratorial section of the leadership of the All Progressives Congress (APC) with the active support of one-time Lagos state Governor Bola Ahmed Tinubu.

"While we may not hold anything against Gbajabiamila as a person, we are nevertheless concerned about his brand of houseboy politics which at all times sways in favour of Tinubu's unquenchable thirst for personal political ascendancy tainted by a tint of tribalism and unpatriotism.

"We consider it a collective embarrassment for a people with the full mandates of their people as parliamentary representatives to tend to strip themselves of the capacity to independently choose leaders from amongst themselves," Babakaka said.

The Chairman added that,"It will be the peak of disappointment if the coming set of our parliamentarians would give reason to believe that they are incapable of exercising the freedom to select their own leaders without prodding by self-serving outside influences.

"We also observe that there are underground forces that are driving these controversies and fueling tensions aimed at causing initial distrust among the NASS members with the attendant risk of making the next four years of President Muhammadu Buhari strenuous and setting the stage for the eventual breakup of the All Progressives Congress.

"We note, like most Nigerians, that there are attempts to manipulate the process by some external forces bent on imposing their lackeys on the nation's federal legislature to pave way for the actualisation of their individual political agenda.

"We also note that the typology of the controversy over the selection process of the new NASS leadership and the dimension it has taken of recent, are a serious cause for concern to all well-meaning Nigerians and friends alike.

"We are worried that the leadership of the APC and President Muhammadu Buhari are failing to see the entrenched risk in the trap to get them to openly endorse the adoption of candidates drawn from particular zones to the exclusion of other zones of the federation with equal entitlement," Bukar Zanna said.

He said: "If only for the sake of fairness, justice and equity, we strongly believe that the South-East is more eminently qualified for the slot of the Speaker of the House of Representatives in compliance with the nation's federal character principle."

"And in conformity with the global poise on affirmative action, we strongly recommend that a female member of the House should be given the position.

"In this regard, after due consideration and assessment of all possible candidates from the South East, we are convinced that Mrs Nkeiruka Onyejeocha, representing the Isuikwato/ Umunneochi Federal Constituency, of Abia State is by whatever criteria competent to take up that responsibility.

"Aside being a Right Honourable Gentle Woman which is also key as she could be a stabilizing factor, Mrs Onyejeocha happens to be one of the highly experienced legislators; an active member of the House since 2007 and a core party loyalist.

"Other bills initiated by Mrs Onyejeocha include the National Council of Traditional Rulers (Establishment) Bill, 2015. (HB. 113),

"A Bill for an Act to amend the World Meteorological Organization (Protection) Act, 2015. (HB. 271), Witness Protection Programme Bill, 2015. (HB. 132), and the Trade Disputes (Amendment) Bill, 2017 among several other bills with far reaching impact.

"She is also a detribalised nationalist with an impressive record of honesty, steadfastness, prudence, patience and integrity to rhyme with President Buhari's ideals", Babakaka said.

The Chairman further explained that for the avoidance of doubt we restate that we are solidly in support of the candidature of Honourable Nkeiruka Onyejeocha and urge all independent-minded members to endorse her eventual emergence as the new House of Representatives Speaker in a transparent democratic process.

"We also commit ourselves to champion her course across the entire northern region and to reach out to other relevant stakeholders and like-minded groups and individuals across the the country as we see Mrs Nkeiruka Onyejeocha as a symbol of hope for women, hope for the younger generation, hope for unity and hope for the future.

"Already similar representations have been made by our coalition in Kaduna in the North West and Niger in the North Central with a solemn commitment to sustain the tempo throughout the remaining days before the inauguration of the 9th National Assembly", Babakaka said.