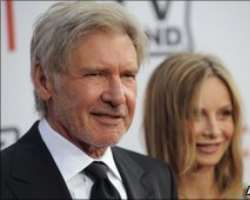 Actors Harrison Ford and Calista Flockhart have married in Santa Fe, their publicist has confirmed.

Ford, 67, and Flockhart, 45, tied the knot at the hilltop mansion of New Mexico Governor Bill Richardson, who also presided over the ceremony.

Ford, famed for the Star Wars and Indiana Jones franchises, has been married twice before and has four older children and two grandchildren.