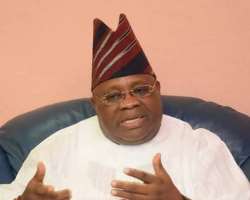 The new case was instituted by Mr Ajayi Shuaib on behalf of himself and the concerned PDP members urging the court to determine whether the certificate presented by Adeleke to the Independent National Electoeal Commission for the election was genuine or fake.

In the suit number FHC/OS/CS/16/2019, the plaintiffs urged the court to determine the authenticity of Senator Ademola's academic qualification, particularly whether the school testimonial he presented met the constitutional requirements of a secondary school certificate.

Also joined in the fresh suit were the PDP and the Independent National Electoral Commission, INEC as 2nd and 3rd respondents.

According to the Originating Summons, Mr Shuaib, through his counsel; Barrister Seyi Oyagbile told the court that section 182(1)(J) of the Constitution, "specifically states: a) provided that a Candidate must present a certificate to INEC.

The litigants sought for an interpretation of section 182(1)(J) of the Constitution in the case of the documents presented by senator Adeleke as his academic qualification to INEC. They also asked the court to determine whether the document presented by the senator are certificates and whether they are authentic.

Barrister Oyagbile said if any of litigants' questions get "no" as answer, the court should also determine whether senator Ademola could be adjudged a lawful candidate of the PDP or not.