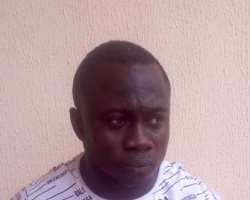 A top police source told The Nigerian Voice that Small Rugged was arrested along Ikirun-Osogbo road by men of Special Anti Cultism Squad.

An eyewitness told The Nigerian Voice that the policemen trailed the Small Rugged to the area where he was arrested and taken to the police headquarters at Ring Road.

Taoreed was said to be the leader of Eiye confraternity in Osun State and he was arrested and arraigned in court for committing several offences two years ago but he was granted bail and he jumped bail and disappeared since then.

The police source said "We have arrested Taoreed Adebayo, aka Small Rugged. He has been evading arrest for the past two years that he was granted bail at the court."

"Yes, it is true that he is the leader of eiye confraternity in osun state. He is also operational partner of one Esubiyi who is presently in Ilesha prison for cases of murder and armed robbery".

"Adebayo, Esubiyi and one late Hammed Olugbodi killed one Bode at Sadiat area in osogbo and went away with some valuable items including cash of 4 million naira."

"They also killed one Adedeji at Tinumola Easte in Osogbo and shot one Ibidun Alaamu at Church Street in Osogbo and the victim lost his two sight."

The Police Public Relations Officer for Osun State Police Command, Mrs Folasade Odoro while confirming the arrest of Small Rugged said he would be arraigned in court after diligent investigation.