U.S. House speaker: Congress has not approved war against Iran 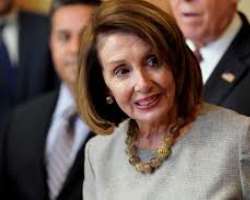 WASHINGTON (Reuters) – The Trump administration does not have congressional authorization to go to war against Iran, the Democratic leader of the U.S. House of Representatives warned on Thursday amid escalating tensions in the region.

“I like what I hear from the president — that he has no appetite on this,” she said. The Washington Post, citing several unnamed U.S. officials, reported late Wednesday that Trump was frustrated that his advisers may be rushing into war and that he preferred a more diplomatic approach and direct talks with Iran.

Pelosi also told reporters that the Republican administration would provide a classified briefing for top lawmakers — the so-called Gang of Eight — on Iran later on Thursday.

But Trump’s administration so far has rebuffed requests to brief the full House on Iran as it has for congressional requests seeking information on North Korea and Venezuela, she said at a news briefing.

“This is part of a pattern that is not right because we have responsibilities — the responsibility in the Constitution is for the Congress to declare war, so I hope the president’s advisers recognize that they have no authorization to go forward in any way,” she said.

The Authorization to Use Military Force (AUMF) law passed in 2001 cannot be used to authorize action in Iran, she added.