To serve with heart and might; celebrating the Nigerian worker 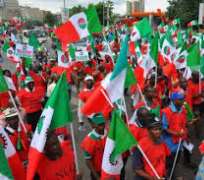 Labour was the first price, the original purchase-money that was paid for all things!

Whereas, not only has the Labor of our heroes past been in vain due to the excessive looting of their

pensions and arrears making them liabilities for their children, their families and society at large; the

the world.
The tenets of equity and the beauty of labor is well encapsulated by Karl Marx in his quote " For each

How then do we serve with heart and might when it is glaring that our labors will be in vain? When

workers neither gets rewarded according to ability nor needs. How?

maltreated our labor force increasingly becomes by the day.

building
But then as a Nation our leadership is unintentional and our representation non soliciting. The Nigerian

worker have been trampled upon, battered, dejected, used, and molested in ways unimaginable

constant despair.
We failed to realize that the effectiveness of our workforce either publicly or privately would determine

how productive and progressive we intend to become as a Nation.

Young professionals are leaving in droves because everything in Nigeria will kill you, but then It's

workers who have political connections or would be ready to pay for promotion in kind.

that work gets done in moving Nigeria forward irrespective of the many untold challenges. Our workers

are indeed heroes whose labor we must ensure never go in vain.

How more denigrating is it going to be when foreigners treat our workers as slaves in our own country,

reduces unemployment rate look the other way in exchange for bribes and benefit.

What law protects the Nigerian worker? how diligently is it implemented? These and many other glaring

reasons negates our National creed. Our labors are toiling in vain, maltreated first by the government

with non payment of salaries, the private sector by fraudulently shortchanging workers, and foreign

or remorse.
The Nigerian worker is overworked and underpaid. Job security is not a very good lexicon for the Nigeria

worker who is constantly in search for greener pasture; whose government have failed over time and

whose society places so many expectations upon.
The Nigerian worker is my HERO, her effort is geared towards advancing our nation and providing for

we make demands, demands that are clear and within the whims of our constitutional right that the

welfare of workers becomes prioritized for it was not by gold or by silver, but by Labour, that all wealth