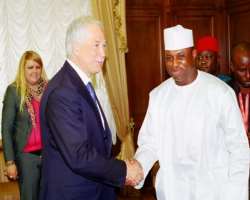 ABUJA, JUNE 16, (THEWILL) - Determined to carry out their threat of forcing the Speaker of the House of Representatives, Hon. Dimeji Bankole to resign after today’s expiration of the seven days ultimatum to quit office, legislators under the aegis of Progressives have alleged that Bankole misappropriated N9 billion capital votes in two years.

But House Committee Chairman on Media and Publicity, Hon. Eseme Eyiboh, quickly said the allegations are spurious and frivolous labelling the Progressives as "legislative delinquents", working for an unfocused agenda.

They have asked Bankole to show cause for these expenditures totaling N9 billion which they said was spent on automobiles apart from other procurement items via documents handed the media today.

Hon. Dino Melaye who spoke on behalf of the Progressives said, "The House received a total sum of N11 billion for 2008 and 2009 and expended the total of 9billion. Majority of House members have no clue on the details of the expenditure purportedly made from this colossal sum. The Hon. Speaker authorized a spurious, vexatious and reckless expenditure profile at a time when there is so much economic hardship, massive unemployment and neglected infrastructure in the Country.

"Let us now illustrate the unacceptable expenditure profile authorized by the Hon. Speaker by giving a few examples."

The allegation also spread to the approval and purchase of LCD 40" Samsung LNS 341 for the House of Representatives for the sum of N525, 000 per unit (for members)", but that the "market price for this product is about N180, 000" saying that the purchases violate section 15(1) (a) of the public procurement Act, 2007, which provides that "The provisions of this Act shall apply to all procurement of goods, works and services carried out by the Federal Government of Nigeria and all procurement entities."

Eseme also said that instead of going to the press to make a show of their worthless pursuits, they should have gone to any of the anti-corruption agencies to present their case adding that when the House resumes plenary, the "boys will be separated from the men."