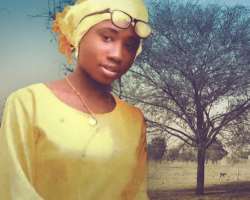 Urging president Muhammadu Buhari and the security forces to borrow a leaf from Britain on how so well it has coordinated the search eleven years running of the then 4 year old Madeleine Mccann, Nigerian government has been tasked on the Nigerian abducted Christian teenager Miss Leah Sharibu.

Making the observation on the 16th birthday anniversary of the Yobe state born Christian teenager abducted by boko haram terrorists alongside her Moslem colleagues who were all released on the intervention of the Federal government, the HUMAN RIGHTS WRITERS ASSOCIATION OF NIGERIA (HURIWA) challenged the Nigerian government to publish the records of how much it has spent so far in the rescue efforts.

HURIWA said it was shameful that whereas Nigeria pretends to be practicing constitutional democracy with transparency and accountability as the key principles just like what obtains in other democracies including Britain, but Nigeria has failed to render public account of the financial commitments it has made in the rescue of the hundreds of girls abducted by the armed Islamists of boko haram terrorists.

Wondering why Nigerian government do not copy the positive examples of Great Britain which periodically publishes public expenses on such cases including the subsisting case of the then little Madeleine Mccann who disappeared in Portugal about eleven years ago, but HURIWA regretted that the Nigerian government does not even seem to be making any concrete effort to free Leah Sharibu and the remaining Chibok girls.

HURIWA recalled that in Great Britain, detectives have been granted more money to continue the search for Madeleine McCann, nearing 11 years since her disappearance while on holiday with her family in Portugal.

HURIWA recalled that So far more than £11.75m has been spent on the UK’s investigation, named Operation Grange.

HURIWA recalled that British Government's funding has been agreed every six months, with £154,000 being granted from October last year until the end of March 2019 just as it is thought the latest round of funding will be as much as £150,000.

HURIWA recalled that a Home Office spokesman said: “The government remains committed to the investigation into the disappearance of Madeleine McCann. “We have briefed the Metropolitan Police Service (MPS) that its application for Special Grant funding for Operation Grange will be granted.”

He said: “They are very encouraged that the Met Police still believe there is work left to be done and they are incredibly grateful to the Home Office for providing an extra budget for the investigation.”

HURIWA recalled that Madeleine vanished from the family’s holiday apartment in Praia da Luz in Portugal in May 2007, aged three.Mr. and Ms. McCann, of Rothley, Leicestershire, have vowed never to give up trying to find their daughter even as in 2011 the Met Police launched its own investigation into what had happened to the child.

HURIWA also accused the religious leaders of the Christian Association of Nigeria of doing next to nothing to ensure that the Nigerian government fulfills its obligations to guarantee security of life of the then 14 year old Christian girl whose reason for continuous detention by the terrorists is that she is a Christian whereas hundreds of other Moslem children were released after suspected payments of heavy ransom by the Nigerian government.

“As citizens with equal rights and responsibilities, we demand that President Muhammadu Buhari should direct the security forces to publish the financial details of what government has committed in the efforts to rescue the Chibok and Dabchi school girls kidnapped by the boko haram terrorists. Great Britain does same whenever citizens are missing”.

HURIWA said it is totally aligned to the position expoused by erstwhile Education Mrs Oby Ezekwesili who stated as folliws: "History will record that a young daughter of our country #LeahSharibu was left behind when her schoolmates were retrieved from terrorist abduction. She stood unwilling to negotiate her faith for freedom. @MBuhari promised, yet Leah is still with terrorists. She’s 16 today. Tragic."

HURIWA quoted Mrs Oby Ezekwesili as also affirming that: "Tragic that the government of President @mbuhari continues to fail Leah, 112 Chibokgirls, Alice Ngada of UNICEF and others abducted whose identity we do not know. #OurBirthdayPrayersForLeah: That this weeping has painfully endured for 449 nights but Joy shall come soonest one morning when you shall return to your heartbroken parents in Jesus name. "