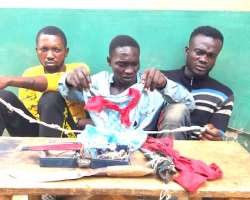 The cultists who have all confessed their membership of EIYE confraternity include Olagboye Abidemi, Olasemojo Michael and Wasiu Waheed.

Other items recovered from cultists include one jack knife, one blood stained silver knife and other assorted charms.

The Police Public Relations Officer for the command, Mr Abimbola Oyeyemi said the operation was in continuation of the war against cultism and other violent crime.

He said the suspects were arrested at Agbowa area of Ogijo. "The DPO Ogijo division Muhammed Suleman Baba on routine patrol got information about the hideout of the cult group where they usually initiate new members and the place was subsequently stormed and three members of the group were arrested."

The commissioner of police in the state, Bashir Makama ordered the transfer of the suspects to Anti kidnapping/cultists section of the state criminal investigation and intelligence department for discreet investigation.