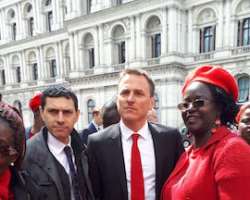 This was a good week for the prospects for democracy and eventual end to one-man rule in Uganda.

At a protest organized by Diaspora Ugandans in London, British Members of Parliament (MPs), Dr. Paul Daniel Williams and Alex Sobel, condemned dictator Yoweri Museveni and called on the British government to end its support for the illegitimate regime whose human rights abuses are now unprecedented.

The law makers rallied with Ugandan expatriates in the UK who held a public protest Tuesday, May 7, in central London to show their solidarity with the people at home who are being brutalized and oppressed by Gen. Museveni's illegitimate regime. The dictator stole the 2016 elections, as he did the previous three votes.

Williams and Sobel, represent Stockton South and Leeds North West constituencies respectively. Williams is a strong friend of Uganda and in January sponsored a debate on the floors of Parliament here where some MPs referred to the Museveni government as a "military regime" while others condemned him for rigging elections, stealing foreign aid money, and killing his opponents. During the debate Williams said sanctions against the Museveni regime is an option increasingly pressed by Ugandans.

The murderous dictator survives by the financial and military support of the U.K. and U.S. administrations. He's a reliable puppet for the West, much as Mobutu was from the 1960s through the 1990s.

The two British MPs on Tuesday stated that, their country is ready and willing to support a more stable and democratic Uganda. The two are among an increasing number of lawmakers here who want to see a Uganda without Museveni in power, as do the majority of Ugandans. Polls showed that 85% of Ugandans were against Gen. Museveni's 2017 measure that removed the 75-age limit from the constitution, paving the way for his life-presidency.

"We want to see a free Uganda. Our message; we stand with you as brothers and sisters," Williams, who is also a medical doctor and worked in Uganda many years ago, said at the protest rally. "We call for action from the British government, the Commonwealth and from the United Nations."

Dictator Museveni's family and other powerful men in his government have stolen huge chunks of land by force, leaving many villagers landless, homeless and refugees in their own country. Many civilians have been killed in the process. While carrying out a domestic ethnic cleansing campaign, Gen. Museveni's public relations liars have been selling the story that he's created a haven for refugees from South Sudan, who, in fact, fled their country after his army invaded in December 2013. The regime has stolen hundreds of millions of dollars sent by the international community for refugee relief.

"We want people in Uganda to be free: exercise their rights without military interference, without political oppression and without intimidation," Williams, who is very familiar with the state of affairs in Uganda, said.

"To the people in Uganda who are struggling," he said, "Kizza Besigye, Bobi Wine, Betty Nambooze and Dr. Stella Nyanzi, we stand in solidarity with you, in your political and civic leadership."

Williams was referring to, respectively, Uganda's former presidential candidate; MP Robert Kyagulanyi, a.k.a. Bobi Wine; Nambooze, an MP brutalized and semi-paralyzed by Museveni's secret police when it raided Parliament to stop MPs from filibustering the bill to remove age limits; and, the Makerere University scholar, Dr Stella Nyanzi, who has been in jail since November 2018, for denouncing Museveni's corruption on social media.

Williams said: "The British people are on your side. And we will keep fighting until we achieve justice and peace for the people of Uganda."

MP Sobel said: "We're here opposite No. 10 Downing Street; if we were in Uganda, we would be in prison." He added: "I'm calling on all the people of the world and all the governments to press for the rule of law in Uganda. The rule of the law has gone--- We're with you and all other hundreds of other MPS here."

In addition to banning Bobi Wine from holding musical concerts --he's one of Uganda's best entertainers-- and blocking Dr. Besigye from radio station interviews, dictator Museveni recently arrested Bobi Wine again, sparking global outcry and a demand for his immediate release by a U.S. Senator. Without support from the U.S. the dictatorship would quickly collapse like Omar Bashir's in Sudan.

Gen. Museveni now presides over one of the most corrupt and brutal regime in the history of Uganda.

Ugandans in the U.K. and elsewhere in Diaspora call for the UK to impose a ban on weapons sales to Museveni's illegitimate regime since some of the equipment are used in the torture and killing of civilians. They also call for a special session of the UN Security Council to discuss the on-going gross violations of human rights in Uganda and the violent land-grabs. They are pushing for a travel ban on the dictators' key officials including the notoriously corrupt foreign minister Sam Kutesa.

A U.S. federal court on March 25, 2019 sentenced to three years Chinese dealer Patrick Ho for bribing Museveni and Kutesa a total of $1 million for a Chinese oil company.

A U.S.-branch office of Ho's bank was used to wire some of the money and the F.B.I. sprung into action. Museveni's $500,000 share was delivered in cash wrapped as "gifts" by Ho when he traveled to Uganda in a Gulf Stream jet with a delegation from China to attend the dictator's swearing in.