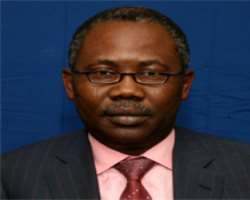 
ABUJA, June 16, (THEWILL) - Hon. Bassey Etim, a member of the House of Representatives has dragged the Attorney General of the Federation and Minister for Justice, MR. Mohammed Adoke, SAN and acting chairman of Independent National Electoral Commission (INEC), Solomon Soyebi to the Independent Corrupt Practices and Other Related Offences Commission (ICPC) overã€€fraud and corruption for allegedly issuing a certificate return to his opponent, Mr. Emmanuel Obot.

Etim alleged in his petitionã€€to the Chairman of ICPC said that the AGF, who was a solicitor to Obot before his appointment used his position to ‘influence the acting INEC chairman to issue a certificate of return to Obot despite the fact that the Supreme Court was yet to adjudicate on the matter.

"I write to humbly appeal for your kind intervention in the fraudulent and corrupt issuance of certificate of returns by Mr. Solomon Soyebi, the acting chairman of the Independent National Electoral Commission, in collaboration with the Attorney General and minister of Justice Mohammed Adoke SAN, who was the lawyer to one Mr. Emmanuel Obot, my opponent in the Akwa Ibom State Election Petition Tribunal," Etim said in a petition dated June, 14, 2010.

Etim told reporters today that former chairman of INEC Prof. Maurice Iwu, had before now taken a decision that all pending cases be thrashed out to determine the right candidate for the PDP in the 2007 general elections before the new twist recently.

But Adoke through his media aide Chuks Akunna described that allegations as 'false and reckless', stating that he had nothing to do with issuance of certificate of return to Emmanuel Obot, nor influencing INEC.

Akunna explained that it was "most baffling for Etim’s ignorance of the judicial process. He had actually imagined that an appeal filed in the Supreme Court automatically translated into a stay of execution of the judgment of the Court of Appeal in favour of his opponent!

Recall that an Appeal Court sitting in Calabar, Cross River State capital, had declaredã€€Obot the actual candidate of the PDP in the 2007 general Election for the Uyo Federal Constituency and should be sworn in place of Etim,ã€€but Etim has challenged the decision at the Supreme Court.