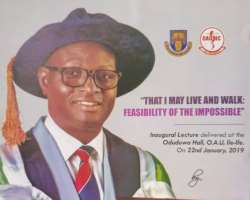 Facts have emerged that the abductors of Professor Olayinka Adegbehingbe of the Obafemi Awolowo University, Ile-Ife took N5 million before he was released.

The payment of ransom was confirmed as he attributed his release to the power of God.

He told newsmen that the kidnappers had demanded for N30m and later collected N5 million for his release after much negotiation.

He condemned the level of insecurity across the country, saying majority of the youths are jobless and have now resorted to crime.

Professor Adegbehingbe urged the Federal Government to invest more in security in the country.