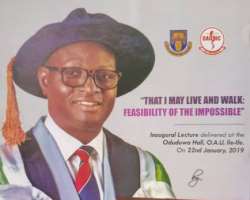 Family, friends and staff of Obafemi Awolowo University, (OAU), Ile-Ife are worried over the whereabouts of Professor Olayinka Oladiran Adegbehingbe who was kidnapped by gunmen.

Speaking with The Nigerian Voice today, Mr Abiodun Olanrewaju, Public Relations Officer of the university said the Kidnappers have not contacted anyone since the professor was abducted yesterday.

The professor was kidnapped by unknown gunmen on Sunday evening while traveling on Ife-Ibadan expressway when he was going to Ife.