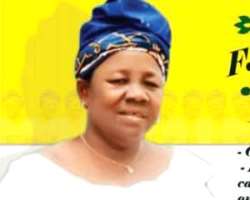 The pastoral community of Agubata Echara in Ikwo Local Government Area of Ebonyi State became a centre of attraction between Thursday, 25th and Sunday 28th April, 2019 as it was thronged by a cross-section of Ebonyi State and her neighbours in the manner of world class pilgrimage centres. The occasion was the obsequies of MOTHER JOSEPHINE NWOBA NWACHUKWU, the mother of the senator that represented Ebonyi Central senatorial district in the 6th session of the Nigerian Senate who currently serves as the Honourable Commissioner for Information and State Orientation in Ebonyi State, Senator Emmanuel Onwe, Ph.D. The five-day programme which high points were the service of inhumation and actual inhumation of the remains of MOTHER JOSEPHINE NWOBA NWACHUKWU on the Friday, 26th April, 2019 attracted the Governor of Ebonyi State, Chief David Nweze Umahi; former Governor of Abia State and senator-elect for Abia North district, Dr. Orji Uzor Kalu; the Prelate/General Assembly Moderator of the Presbyterian Church of Nigeria, His Eminence Nze Nsi Eke as well as the clergy and faithful of Presbyterian Church of Nigeria; federal and state legislators from Ebonyi State; members of Ebonyi State Executive Council; women groups, students and the numerous beneficiaries of the enormous but silent charity programmes of the son of the fallen heroine to the expansive country-home of Senator Onwe otherwise known as "The Den" in Agubata Echara community. Sen. Emmanuel Onwe pointing something of interest to the wife.

In his condolence message, the Governor of Ebonyi State, Engr. David Nweze Umahi extolled the character and quality of life of MOTHER JOSEPHINE NWOBA NWACHUKWU which, according to Umahi, rubbed off on his children especially Senator Emmanuel Onwe whom he said was a reliable and honest public officer who has added more value to the Divine Mandate administration in Ebonyi State through positive application of his great knowledge and vast experience. Umahi urged Senator Emmanuel Onwe and his siblings to put their faith in God; and promised, in appreciation of Senator Emmanuel Onwe's diligence and loyalty, to stand with the family and bring more projects to Ikwo. Umahi promised to return the Presbyterian college, PRESCO, which houses the College of Health Sciences campus of Ebonyi State University to the Presbyterian Church as soon as the relocation of the university campus to Uburu is completed. In an earlier sermon, the Prelate and General Assembly Moderator of the Presbyterian Church of Nigeria, His Eminence Nze Eke, assured Sen. Emmanuel Onwe and all those affected by the death of MOTHER JOSEPHINE NWOBA NWACHUKWU of the helping grace of God; adding that through the resurrection of Jesus Christ, christians can enjoy everlasting life after death Until her transition to eternal glory, MOTHER JOSEPHINE NWOBA NWACHUKWU who passed on in August 2018 at the age of 73 was a quintessential mother and a homemaker who believed and served God without compromise; and served humanity quietly through charity works. An elder of the Presbyterian Church of Nigeria, MOTHER JOSEPHINE NWOBA NWACHUKWU was a reference point for the virtues of humility, diligence and discipline until she passed on. In a message announcing the burial arrangements for his mother, Senator Emmanuel Onwe likened MOTHER JOSEPHINE NWOBA NWACHUKWU to the pelican mother who out of sacrificial love for her young ones goes through severe pains to guarantee the comfort of her offsprings. For the first time, words failed Senator Emmanuel Onwe whose mastery of words is coveted by many. In his speech at the burial service, emotionally-ladened Sen. Emmanuel Onwe asked: "With what words will I praise her?" "In what manner shall I salute her?" For Sen. Emmanuel Onwe, the world is better left to imagine the vacuum created in his heart by the departure of a woman who extracted all the water that Onwe drank, is still drinking and will ever drink "barehanded from the ancient rocks of the African bush". Members of Ebonyi State Executive Council at the service of inhumation.