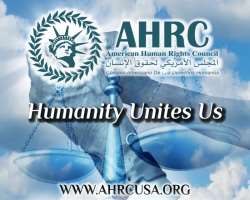 The American Human Rights Council (AHRC-USA) expresses its sincere and warm gratitude to all friends, supporters, guests and sponsors who once again made the AHRC "Spirit of Humanity" Awards and Dinner Gala a greater success this year. The Gala was held on Friday, April 26, 2019 in Dearborn.

The full house of diverse group of friends of all backgrounds, interfaith leaders, government agencies, and law enforcement agencies (local, state and Federal), corporates, businesses, guests (local, out of state and international), members of the judicial system, media and academic institutions. This audience reflected the American mosaic, all united in celebrating the culture of human rights, human dignity and human respect.

AHRC owes its success to all of its supporters, donors and friends who for the past five years provided their support to advance the cause of human rights at home and abroad. AHRC's entire team are humbled by this warm support, reaffirms its unwavering commitment and dedication to defend, protect and advance human rights equally for everyone one.

"No words are enough to express our appreciation and thanks to all who attended the Gala this year," said Dr. Saleh Muslah, AHRC Board President.