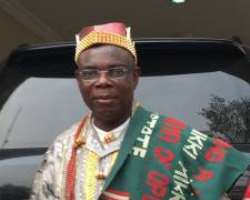 A pressure group in Niger Delta, the Isoko Youth Vanguard ( IYV ), has condemned the continued detention of an associate of former President of Nigeria, King Jonny Turner by officials of the Economic and Financial Crimes Commission ( EFCC ).

President of IYV, Prince Emmanuel Ogba, made the condemnation yesterday in Port Harcourt, the Rivers State capital in an interview with our correspondent.

Ogba noted that the monarch was also arrested by operatives of the Directorate of the State Security few years ago, carting away some documents and unspecified amount of money both in local and foreign currency.

The youth leader who lamented the continued intimidation, harassments and molestation of associates and relations of former President Goodluck Jonathan.

He said: " We are not against the corruption fight by the present administration, but what we frown at is the singling out the administration of Jonathan for the probe.

" If you consider the fact that Jonathan is the only president from the Niger Delta, you will smell witch hunt, hatred and marginalisation ".

"People from various zones of the country have ruled before and none had been so intimidated as the only administration led by a minority Niger Delta person.

" Even the overthrowm administration of Muhammadu Buhari, his era in NNPC Board, and PTF, is he claiming that he was a perfect saint?, he asks.

He appealed to well meaning Nigerians to prevail on Buhari to leave Jonathan and his associates alone, and concentrate on finding lasting solution to the numerous challenges confronting the nation.

" It is either Goodluck Jonathan's wife, his cousin or other associates that are being hurnted while so many other leaders that stole the nation blind are walking freely.

" Even the present administration by Buhari stinks of corruption. Many persons in his cabinet are being accused if huge corruption but Buhari turns his face the other way as if it doesn't matter ", he said.

He regretted that King Turner is a monarch if the first order in Bayelsa and deserves a level of respect, noting that embarrassing him means embarrassing his people.

Ogba urged EFCC to show some respect to the king and do their job without painting him as a common criminal.

He said that serving as chairman of UBEC, and award of contracts is normal adding that if any of the contractors abandoned their contracts, it is up to the anti graft agency to go to such contractors and leave King Turner alone.