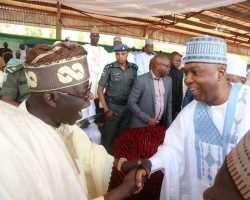 The president of the Senate Dr Bukola Saraki on Monday responded strongly to  to the allegation of budget padding, delay and distortion made against him and Speaker Yakubu Dogara, by APC national leader Bola Tinubu.

The Senate president who attributed the now consistent vicious attacks against him by Tinubu to the role he played in frustrating a Muslim-Muslin ticket in 2015, which other wise would have seen the APC national leader emerge as Vice President.

Saraki’s response in contained in  a 14-point statement issued by his Special Adviser on Media and Public Affairs, Yusuph Olaniyonu.

Sariki said that the allegations by Tinubu were false and fallacious.

The News Agency of Nigeria (NAN) reports that Tinubu had in a statement on Sunday, to make clear his interest in the national assembly leadership, stressed that the APC did not want a repeat of what happened in the 8th senate were its 'un-anointed' leadership high jacked the process.

He said in the statement: “Just look at how outgoing Senate President Bukola Saraki and House of Representatives Speaker, Yakubu Dogara and their like, highjacked the budget process these past four years. ”

“National budgets were delayed and distorted as these actors repeatedly sought to pad budgets with pet projects that would profit them.

”Even worse, they cut funds intended to prosper projects that would have benefited the average person.

“After four years of their antics halting the progress of government, we should do all we can to prevent a repeat of their malign control of the National Assembly, “he said.

However, reacting to the statement by Tinubu, Saraki who alleged that Tinubu 'hated' him, stressed that the delay or otherwise in budget passage was a factor of the time of submission.

He urged the former senator Tinubu to look at the time of passage of budgets from 2010 and compare to the last three years, noting that budgets had mostly been passes between March and May.

Saraki said that the attacks by Tinubu on his person and the leadership of the National Assembly has become quarterly, describing the recent allegations as “careless, irresponsible and callous.

“We therefore demand that he should withdraw it,” he said.

Below is the full text of the statement: