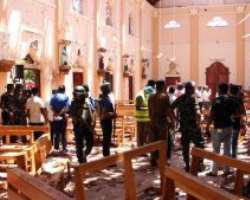 What's happening:  The death toll from a wave of bombings across  Sri Lanka on Easter Sunday increased to 290 on Monday as authorities arrested 24 people in connection with the attacks.

A government minister described the coordinated bombings as a “ brand new type of terrorism ,” after a decade of relative calm in Sri Lanka.

The New York Times reports that the Sri Lankan police have arrested 24 people in connection with a series of devastating suicide bombings at hotels and churches on Easter Sunday that left nearly  300 people dead  and more than 500 injured.

• The government on Monday blamed  National Thowheeth Jama'ath , a little-known radical Islamist organization, for the bombings. An official said the group, which had not carried out any serious attacks before, had help from “an international network.”