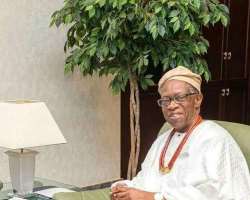 Ekiti State Governor, Dr Kayode Fayemi has commiserated with the government and people of Ondo State and the Owo people on the passing of the Olowo of Owo, HRM Oba David Victor Folagbade Olateru-Olagbegi, describing it as a huge loss.

Dr Fayemi in a condolence message signed by his Chief Press Secretary, Mr Yinka Oyebode, condoled with family members of the late monarch, who he described as a royal father with class and distinction.

Governor Fayemi who described the late Olowo as a monarch who brought intellectual touch to the throne as well as everything he did, said the highly respected Oba would be missed for his amiable personality and sundry contributions to nation building.

Oba Olateru-Olagbegi stood for class, character and distinction. We would miss his wise counsel, candour and intellectual disposition which has helped in the elevation of the traditional institution.