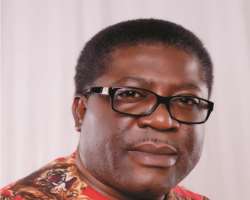 While Imo Deputy Governor, Prince Eze Madumere, joins Christians all over the world to mark Good Friday, he called on Christians to learn from the sacrifices of Jesus Christ.

Madumere's message was contained in a press release signed by his media aide, Uche Onwuchekwa.

According to the release, Madumere described the Good Friday as the day Christians all over the world commemorate the sufferings and ultimate sacrifice of Christ by allowing himself to be crucified on the cross of calvary that He may reconcile man with God.

Madumere further stressed that without the sacrifices of Christ, man would have been totally condemned with no hope of salvation.

He called on Christians to learn from the sacrifices of Christ and forgive one another. He also emphasized the need for Christians to use the period for self evaluation, especially in their relationship with others.

He encouraged all to use the day to visit those who are going through crucibles and put smiles on their faces.

According the release, he advised the good people of Imo State to always look upon Jesus, saying that it is only through Him and Holy spirit that the leadership can be spiritually guided to attend to their yearnings.

He admonished those in the position of authority to yield themselves to the word of God. He also called on those who may have offended the people to find a way to repay them by returning all that they may have stolen from them, warning that it is the only restitution acceptable to God.