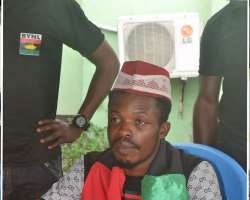 An Igbo group, Igbo Liberty Forum has reportedly gone into agreement with the leadership of Biafra Nations Youth League, BNYL. According to a recent Facebook publication on the official page of Biafra Broadcasting Service, BBS TV, the National Coordinator of the group, Princewill Oduh met with the leadership of Igbo Liberty Forum as they chart a way forward.

The group's Coordinator was today in the country home of the National Leader of BNYL, Princewill Chimezie Richard in the town of Ogwuaga-Abba autonomous community, Abba south, Abba Ancient kingdom, Nwangele local government area, in the Nkwerre nation of Imo State where they discussed on the proposals.

The source said that the National Leader of BNYL, Princewill C Richard did not disclose the purpose of the meeting. It quoted the BNYL Leader as saying "that the meeting is an affair of both groups".

Furthermore, the BNYL said it will intimate the leadership of Alaigbo Development Foundation, ADF, a prominent Igbo nationality group based on the meeting since it has more to do with the Igbo interest.

BNYL Leader disclosed that one of the sureties of Mr Nnamdi Kanu, Emmanuel Rabbi was part of this move. There was also a presentation of the book, "The Only Crime of Yahshua the Messiah". It was presented on behalf of the Igbo Jewish group. Another book titled "The Ancient Crime of the IGBOS- Free Slaves In Nigeria" was presented by the Igbo Liberty Forum as well as proposing documents.

Richard said that the Igbo group plans a Seminar which both members are expected to meet and have exchange of ideas.

The BNYL leader disclosed that the BNYL Leadership will be meeting in Cross River to look into some of the proposals while it goes further with it's plan for seminar.

The source gathered that the Abia State based National Coordinator of the Igbo interest group said it has made wide consultation within the State and have reached out to the State government officials including neighboring Rivers State on new Igbo political strategies.

It was further learnd that the burning issue of Fulani herdsmen menace was discussed by the groups though their discussion was not made public.