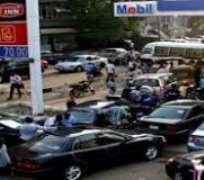 Filling stations in some parts of Lagos experienced queues on Friday amid a supply hitch that slowed down the distribution of the Premium Motor Spirit (petrol).

Our correspondent learnt on Friday that the hitch was resolved on Thursday, with more vessels expected to arrive in Apapa and discharge the product over the weekend.

The pockets of fuel queues in Lagos emerged a day after the Nigerian National Petroleum Corporation restated its commitment to the sustenance of the seamless supply and distribution of petroleum products across the country.

The NNPC, on Friday, appealed to Nigerians to disregard trending social media report of an impending fuel scarcity due to purported refusal by some oil marketers to lift products from depots.

The Group General Manager, Group Public Affairs Division, Mr Ndu Ughamadu, explained that the tale was fabricated by mischief makers with intent to create undue panic in the prevailing sanity in the fuel supply and distribution matrix across the country.

According to the statement, the corporation has over one billion litres of petrol in stock, and there was no need for panic buying or hoarding of petroleum products in anticipation of a phantom scarcity.

The Chief Executive Officer, Mr Clement Isong, in a telephone interview with our correspondent, said the hitch led to the loss of a couple of hours in the transition of products between a vessel and the stations.

“But that hitch was resolved yesterday (Thursday), and we are pumping out as much as possible. Hopefully, the queues should have been cleared by tomorrow (Saturday) morning,” he said.

According to him, major markets have products in their tanks in Apapa and are loading out.

He said, “A vessel is currently offloading and we are expecting two vessels tomorrow. So, we will have three vessels pumping fuel into our tanks, and we will work throughout tonight to supply to the stations. So, if the public just live their lives as normal and there is no panic buying, there will be no queues.

“There is no problem in the supply chain; we just have got to focus to make sure that all the stations have products at the same time, and that the public do not resort to panic buying.”

The Group Managing Director, NNPC, Dr Maikanti Baru, on Thursday, stated that “the present zero queues in the country would be sustained, especially as Easter approaches,” adding that no fewer than 55 depots across the country were fully stocked with petrol.

He explained that 23 depots in Lagos, seven in Port Harcourt, 11 in Warri, six in Calabar and eight in Kaduna, were stocked with petrol.