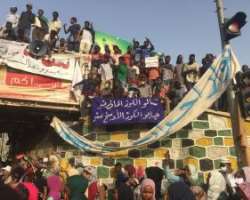 Khartoum (AFP) – Jubilation in Khartoum that Sudan’s era of iron-fisted rule by Omar al-Bashir was ending Thursday quickly soured when protesters realised the old regime had no plans to go.

“Change will not happen with Bashir’s entire regime hoodwinking Sudanese civilians through a military coup,” tweeted Alaa Salah, who has become an icon of the protest movement after a video of her leading demonstrators’ chants went viral.

Excitement and jubilation began to turn to anger and defiance only hours after Defence Minister Awad Ibnouf announced that Bashir had been ousted by the army and a military council was being put in his place for two years.

Thousands of people had flooded the centre of the capital Khartoum from early morning, cheering, waving flags and even kissing and hugging soldiers as they danced on armoured vehicles.

But after the army’s announcement the celebrations evaporated, and the tone hardened.

Demonstrators began re-erecting make-shift checkpoints set up on several streets leading to the sprawling complex, which earlier in the day had been dismantled after an unprecedented five-night sit-in.

While some people had dejectedly already left the site, after standing for hours in the searing Sudanese sun hoping to witness the dawn of a new future, others began to arrive to take their place.

The army has slapped a night-time curfew on the country that started at 10:00 pm.

But as night set in, thousands of protesters defied the curfew and remained camped at the complex, showing no signs of dispersing.

“I cried when Ibnouf made the announcement,” said Heba, carrying a Sudanese flag, as she prepared to spend the night at the complex.

“We have lost our friends in this movement. We feel as if they died for nothing, but we will continue until victory.”

Behind her crowds were chanting their slogan “peace! justice! freedom!” as they thronged the complex for a sixth night running.

“This is a farce. The regime did not fall. This is a reproduction of the same regime,” one demonstrator told AFP, gesturing emphatically.

“This man (Bashir) is a bloodthirsty leader and he is wanted, he brings us another regime. This is completely unacceptable,” added another.

As activists began telling protesters not to leave the site despite the curfew, one woman in a bright red headscarf also dismissed Thursday’s events.

“Ibnouf and Bashir are two sides of the same coin,” she told AFP. “As youth and citizens we see what’s happening, the government is manipulating us.”

Many people were still waving the Sudanese flag, in similar scenes seen in Algeria recently where long-time president Abdelaziz Bouteflika bowed to weeks of popular protests and resigned on April 2.

Gone however were the joyful songs from earlier in the day.

“What has been issued in the statement is recycling of the regime with new faces,” he said in a statement.

It seemed many in the crowd were determined to stand their ground. And it was unclear how the army, which has so far not intervened in the protests, would react.

“We will not let the blood of our brothers be lost for nothing. This is a new duplicate copy of the existing regime,” one protester vowed.