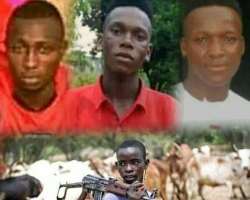 The incident occurred Tuesday at Owah Abbi, Ukwuani local government area of Delta state while the deceased were on their way to the farm at Olimele.

Our source noted: "It is a black Tuesday at Owah Abbi in Ukwuani local government Area Delta state as Fulani herdsmen Killed 3 young promising boys on their way going to farm in Olimele...What a great loss".

The deceaseds includes Lucky Onyenibe, Uchejim Ugochukwu, Okwuazu Chukwuneku just as the source said the trio would be dearly missed by the community.

Our source lamented a situation where the lives of cows are valued more than human lives, "A country where the life of cow is more important then human being".

At press time, efforts to get reaction from the Commissioner of police in the state proved abortive.