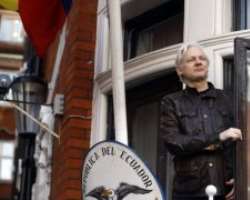 Julian Assange has been arrested at the Ecuadorian embassy in London, where the WikiLeaks founder was granted refuge in 2012 while on bail in the UK over sexual assault allegations against him in Sweden.

Assange, 47, who has spent almost seven years at the embassy after seeking refuge there to avoid extradition to Sweden, was detained after the Ecuadorian government withdrew his asylum, Scotland Yard said. He was held on a warrant issued by Westminster magistrates court on 29 June 2012 when he failed to surrender to the court.

Scotland Yard said: “He has been taken into custody at a central London police station where he will remain, before being presented before Westminster magistrates court as soon as is possible.

“The MPS [Metropolitan Police Service] had a duty to execute the warrant, on behalf of Westminster magistrates court, and was invited into the embassy by the ambassador, following the Ecuadorian government's withdrawal of asylum.”

Ecuador's president, Lenín Moreno, said on Twitter: “In a sovereign decision, Ecuador withdrew the asylum status to Julian Assange after his repeated violations to international conventions and daily-life protocols.”

The home secretary, Sajid Javid, said: “Nearly seven years after entering the Ecuadorian embassy, I can confirm Julian Assange is now in police custody and rightly facing justice in the UK. I would like to thank Ecuador for its cooperation the Metropolitan police for its professionalism. No one is above the law.”

His arrest comes a day after Wikileaks accused the Ecuadorian government of an “extensive spying operation” against Assange.

WikiLeaks claims meetings with lawyers and a doctor inside the embassy over the past year were secretly filmed.

Assange had refused to leave the embassy, claiming he would be extradited to the United States for questioning over the activities of WikiLeaks if he did so.

At the time, Assange claimed that if he was extradited to Sweden he might be arrested by the US and face charges relating to WikiLeaks's publication of hundreds of thousands of US diplomatic cables.

How Julian Assange became an unwelcome guest in Ecuador’s embassy

The journalist and Assange supporter John Pilger called last week for people to “fill the street outside the embassy and protect him and show solidarity with a courageous man”.

US authorities have never officially confirmed that they have charged Assange, but in November 2018 a  mistake in a document  filed in an unrelated case hinted that criminal charges might have been prepared in secret.

The court filing, submitted apparently in error by US prosecutors, mentioned criminal charges against someone named “Assange” even though that was not the name of the defendant. Legal analysts said the error was likely to have been caused by prosecutors copying and pasting from sealed documents.

The relationship between Assange and his hosts has soured over the years. In March, Assange's  internet access was cut off  and he was forbidden from having visitors.

The Ecuadorian president had said Assange had  “repeatedly violated” the conditions  of his asylum in his country's London embassy.The Guardian (UK)