By the Nigerian Voice 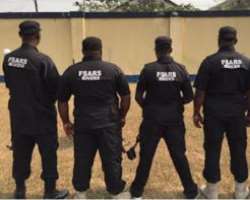 Four dismissed officers of the Special Anti Robbery Squad were arraigned before an Ikeja High Court, Lagos over accusations of corruption and abuse of office.

The dismissed officers identified as Sgt. Adeoye Adekunle, Sgt. Adeniran Adebowale, Sgt. Agbi Lucky and Sgt. Odighe Hehosa, were dismissed following a petition against them by one Mr. Chukwudi Godwin Odionye, popularly referred to as 'Bishop.'

The former police officers were docked on a 3 count charge bordering on conspiracy, corruption of public officer and abuse of office by a public officer

Bishop who wrote the petition on May 2, 2918, alleged that sometimes on June 4, 2017, he was in his house around Alagbado area of the state, when four armed men stormed his house to effect his arrest on the allegation of performing 'FAKE' miracles.

He, however, stated that after his arrest, he was taken to one hotel at Agege, where he was detained and threatened to be killed, if he fails to cooperate.

The petitioner further explained further that the following day, June 5, 2017, he was taken to the bank where he was made to transfer N7 million to the account of one of the operatives.

It could be recalled that the then Assistant Inspector General of Police in charge of Zone 2 Command, Lagos, Adamu Ibrahim, had approved the dismissal of the officers after a thorough investigation.

According to the police, the four policemen were dismissed and subsequently charged before a Magistrate court for armed robbery, kidnapping, unlawful detention, and intimidation, as well as threatening violence.

The four defendants had however pleaded not guilty to the charges.

However, during yesterday's proceedings, counsel to the former SARS officers, A.O Aguegebobo informed the court of a bail application he had filed before the court on behalf of his clients.

According to Aguegebobo, the defendants’ offence is a bailable offence. He also added that investigation on the matter had been concluded by the police.

The defence counsel also informed the court that the defendants have been in prison custody since the 18th of July 2018.

Meanwhile, the prosecuting counsel, Adeola Odumabo, however, did not oppose the bail application.

Ruling on the defendant's bail application, the Presiding Judge, Justice Hakeem Oshodi admitted the defendants to bail in the sum N500, 000 with two sureties in like sum.

“The defendants are hereby admitted to bail in the sum of N500, 000 with two sureties.

“One of the sureties must be a blood relation while the other must be a police officer not less than an Inspector. The defendants are to be remanded in prison custody pending the perfection of their bail,” the Judge ruled.

The matter was thereafter adjourned till October 15, 2019, for trial.