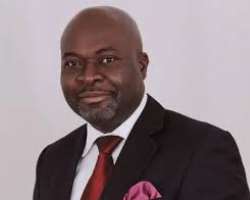 The Deputy Governor of Imo State, Prince Eze Madumere, has joined Nigerians and beyond to pay tributes and bid his kinsman, late former three time Legislator and Speaker of African Parliament, Bethel Amadi, farewell as his remains was finally laid rest on Friday.

The Deputy Governor who was unavoidably absent during the funeral service following a must-travel-out-of-the-state schedule sent his condolences through a press release issued by his Chief Press Secretary, Uche Onwuchekwa.

Madumere stated that Amadi was a very young vibrant leader most youths looked up to but death snatched him away at his prime, even at a time he was needed most to play a role in re-engineering process of the very foundation of a new Imo state of collective dream.

While condoling the family and praying God to grant them the grace to bear the unfortunate loss, he called on the good people of Imo State to learn from humbling power of death and it's non-discriminatory visits to all ages, cadre and position in the polity.

He emphasized the need for all to positively contribute their quota in the society whenever the opportunity beckons, for no one knows the hour his own call shall be, describing every condition and position as only momentary.

He added that Amadi will be remembered for his vibrancy at the National Assembly and the youthful leadership prowess he brought to bear while leading African Parliamentarians. He prayed for the repose of his soul.