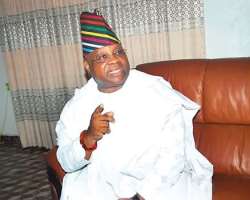 The governorship candidate of Peoples Democratic Party in the 2018 gubernatorial election Osun state, Senator Ademola Adeleke has appealed against the judgement of an Abuja High Court that disqualified him as a candidate.

The appeal suit file today (Thursday) with no FCT/HC/BW/80/122/2018 was filed at the Abuja High Court in which Adeleke sought the reliefs the Court of Appeal to set aside the Judgment and Rulings of the lower Court delivered on 2nd April 2019.

Adeleke also sought the relief of the appellate court to strike out and or dismiss the originating summons dated 4th of September, 2018 in its entirety.

He urged the Appeal Court to invoke the Section 25 of the Court of Appeal Act and grant all prayers.

It would be recalled that the High Court of the Federal Capital Territory sitting in Bwari in its judgment dated 2nd April, 2019 disqualified Adeleke as a candidate in the last year gubernatorial election in Osun State.