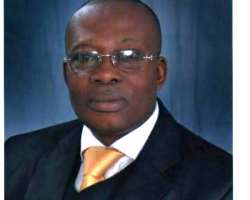 A group of concerned lawyers, under the aegis of Concern Friends and Associates of Monday Ubani, has called on the Economic and Financial Crimes Commission, EFCC to comply with a Federal High Court and release Mr. Monday Ubani from its detention.

In a statement, the group noted that the attitude of the EFCC in the handling of Ubani’s matter is vindictive and unprofessional.

The statement read: “The attitude of the EFCC in handling the case in which Mr. Monday Onyekachi Ubani Esq stood as a surety for Mrs. Ngozi Olejeme is unlawful, vindictive and unprofessional. It offends international best practices and makes a mess of the Commission’s mandate and Nigeria as a nation before the comity of Nations.

“Mr. Monday Ubani sometimes in 2017 persuaded Mrs. Ngozi Olejeme to return back to Nigeria to answer to the allegation against her, having been declared wanted by the Commission. Mr. Ubani ensured her return to the country even when Mrs Olejeme feared that she would be persecuted and not prosecuted by the commission.

“That upon Mrs Olejeme’s return to Nigeria, Mr. Ubani took her to the commission where she was interrogated for days, subsequent upon which Mr. Ubani applied for her bail but was denied by the commission until he applied to court for the enforcement of her release.

“Having rejected all sureties produced by Mrs. Olejeme, Mr. Magu, who is the chairman of the Commission then informed Mr. Ubani that he would only release Mrs. Olejeme to his counsel and to a family relation.

“Due to Mrs. Olejeme’s health condition, especially based on the fact that she was undergoing medical treatments in South Africa before Mr Ubani persuaded her to return to the country, and coupled with the fact that it was visibly evident that Mrs Olejeme needed continuous medical attention, Mr. Ubani decided to stand as surety for her, with the expectation that the Commission would charge her to Court in a couple of weeks, after which he would cease to be her Surety.

“That upon Mrs Olejeme’s release from EFCC’s custody in Abuja sometimes in December of 2017, she went back to her home in Abuja where she continued to undergo her medical treatment. After her release she dutifully honored every invitation and adhered to her bail conditions. However, sometimes in April of 2018, another set of operatives of the Commission from Enugu Branch mobilized and invaded her residence in a Gestapo style. After that incident, Mr. Ubani made several attempts to reach Mrs. Olejeme on phone to no avail. Mrs Olejeme from that day could no longer be reached.

“The question that begs for answer is, “How is Ubani culpable or responsible for the uncoordinated act of the commission, which led to the disappearance of Mrs. Olejeme?”

“Since EFCC forced the woman to abscond, it behooves on the Commission to release Ubani unconditionally. There must be an end to this harassment and disobedience to court orders.

“The EFCC should release Monday Ubani Esq in compliance with the order of the Federal High Court Abuja, given on the 26th day of March, 2019. Given that the bedrock of any civilized society is obedience to the rule of law, EFCC cannot habitually and flagrantly disobey court orders only to run to the same court to obtain order that suits their whims and caprices.”