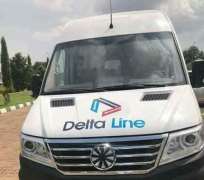 Delta State Government said it has jointly guaranteed with other shareholders the sum of N7,9billion, in order to aid accelerated execution of road projects by contractors before the onset of the rainy season and for Delta Line to be able to raise required funding.

A statement signed by the state Commissioner for Finance, Mr David Edevbie and posted by one Harry, on Delta NUJ Forum's WhatsApp platform stated that these are not borrowings by the state Government but guarantees of loans to third parties granted in the public interest.

Mr Edevbie stated that in a bid to revamp the ailing Delta Transport Service Limited, (Delta Line), which had relied on continuous assistance from the state government to meet salary and other recurrent as well as capital expenditure, the State sold 60% equity of the company to God is Good Transport Development Company (GTDC) in a Public Private Partnership arrangement while retaining 40% equity in the company.

According to the statement, “Sequel to the sale which amongst other things involved defrayment of outstanding commitments including salaries arrears, the new management of Delta Line submitted a 5-year business plan to shareholders which among other things envisaged a capital injection of ₦4,998,669,000 for the procurement of 130 commuter buses as well as the renovation/establishment of 18 terminals with information technology infrastructure and furnishing across the country”

The statement further stated that, due to the inability of the State Government to fund its 40% equity contribution as proposed. It became expedient for Delta Line to raise the required funding via debt supported by the joint and several guarantees of shareholders.

Consequently, the State Government on July 11, 2018 agreed to jointly guarantee with other shareholders, the proposed term loan facilities of ₦4,998,669,000 sought by Delta Line which was supported by the Delta State House of Assembly on March19, 2019.

“The envisaged benefits of a fully operational Delta Line the Commissioner said include direct and indirect employment for at least 1,500 Deltans, increased independently generated revenue, better public services and increased economic activities in the State.

He stated that, due to a fall in Federation Accounts receipt in January 2019 which hindered planned payments to some contractors handling road project, it became necessary for the State Government to support the contractors in accessing financing to aid accelerated execution of the projects before the onset of the rainy season.

The Finance Commissioner hinted that, on February 5, 2019, the State Government agreed to support the contractors to obtain short-term loan facilities amounting to ₦3,000,000,000 from Zenith Bank Plc by way of a guarantee which would be repaid by June 2019 and this was supported by the State House of Assembly in a resolution passed on March 19, 2019 passed a resolution in support of the guarantee.