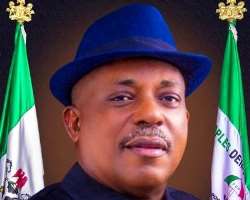 Okowa joined Secondus’s family, friends, well-wishers and party members in celebrating another “milestone in the lifetime of a patriotic Nigerian who personifies the meaning of diligence, hardwork and patrotism,’’ Aniagwu quoted the Governor as saying.

According to him, Secondus stands out as a beacon of hope as he continues in his quest to rebuild, reposition and regain power for our great party for the good of the nation.

He said that Secondus’s leadership provided level playing field for all members and was instrumental to the succesful party primaries which totally eliminated imposition and impunity in the build up to the just concluded general elections.

The Governor lauded the Chairman's efforts in promoting the unity of the party, adding “I am particularly glad that your cardinal objective to rebuild, reposition and regain power for our great party is fully on course as evidenced in our impressive performance in the last general elections,"

Okowa prayed to God almighty to grant the celebrant “more years of good health and fulfillment to see a nation where things will begin to work again in all facets of our national lives.’’