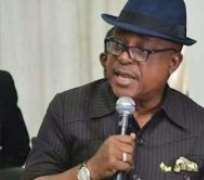 The Peoples Democratic Party (PDP) has petitioned the National judicial Council over the exparte order stopping the Independent National Electoral Commission (INEC) from concluding the governorship election in Bauchi State.

The party's National Publicity Secretary, Mr Kola Ologbondiyan said that the petition was filed in an affidavit sworn to by the PDP's National Chairman, Mr Uche Secondus, in Abuja.

On Tuesday, a Federal High Court in Abuja barred INEC from resuming the collation and announcement of governorship election result in Bauchi.

The PDP, barely 24 hours after rejecting the order described the ex parte order issued by Justice Ekwo as a violation of the Constitution and Electoral Act by sitting on a matter that ought to have been handled by an election petition tribunal.

It added that in granting an ex parte order stopping from concluding the governorship election in Bauchi State, Justice Ekwo violated Section 87(11) of the Electoral Act, “which states that no court has the power or jurisdiction to stop any election pending the determination of a suit.”

It stated that issues of collation of results and declaration of winner, is a post-election event, were under the Electoral Act and Constitutional provisions for the election petition tribunal.

It quoted the affidavit stating that, “despite this clear provision of the law, Justice Ekwo decided to hear the application within 24 hours on March19 and issued an order on INEC not to continue with the election until the case before him is finally decided.

“That the collation of results is a post-election event and under section 87(11) of the Electoral Act, no court has the power or jurisdiction to stop any election pending the determination of a suit.

“That as a result of the order on the Independent National Electoral Commission, the conclusion of the Bauchi State Governorship election which was to take place on 19th March 2019 was stalled.

“That the order of Justice Ekwo was made contrary to the provisions of the Constitution of Nigeria, 1999 as amended dealing without fair hearing and also section 87(11) of the Electoral Act.

The party said that not only did Justice Ekwo violate the clear provisions of the Electoral Act, adding the motion granted is also an affront to the electoral wishes of the people of Bauchi State.

The PDP urged the NJC to save the country's democracy by taking an urgent step against the order.

Though INEC said it has complied with the order, it was however challenging it.

Mr Festus Okoye, INEC's National Commissioner, Information and Voter Education said the commission has filed a 'motion on notice`, challenging the jurisdiction of the court in granting the order.

” The motion has not been taken. Until that motion is taken, the court order barring us from collating the result of Tafawa Balewa area subsists,” he said.

Although Okoye told the News Agency of Nigeria (NAN) on Tuesday in Abuja, that the commission has stopped the collation of the governorship result, he said the collation process would continue in the state assembly elections in the affected areas.NAN