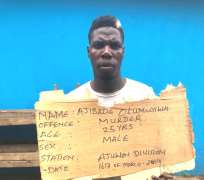 Olumuyiwa was said to have killed Balogun on Monday for having an amorous relationship with his wife.

The suspect was arrested at about 1:45 am following a distress call received by the DPO Ajuwon division from residents of Doland estate that a man has murdered his wife's man friend.

On the receipt of the distress call, the DPO, CSP Afolabi Kazeem led his detectives to the scene where the suspect was promptly arrested.

On interrogation, he explained that he came to his house at about 12: 30 midnight on the fateful day and met the deceased right inside the house with his wife, this infuriated him and he started beating the man and hit his head against the wall leading to the the death of the victim.

On her own part, the woman, Titilayo Olayiwola denied having any amorous relationship with the deceased.

She explained that the suspect has abandoned her in the house for the past 8 months with an instruction to the gateman to be monitoring her and give him information if he see her with any man.

She stated further that the deceased was a cobbler leaving in the area and on that day, the girlfriend of the deceased wanted to come and see him and that she (Titilayo) agreed to allowed them in her apartment.

She said while the deceased was in the apartment, the gateman saw him and alerted her husband who rushed to the house and descended heavily on the Balogun without listening to any explanation from her and the girlfriend of the victim.

The corpse of the deceased has been deposited at the general hospital mortuary for post mortem examination.