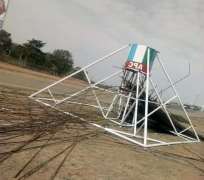 The giant All Progressives Congress (APC) giant broom, which generated a lot of controversies when it was erected at the entrance of the Abuja City gate, has been pulled down.

They alighted from the vehicle and brought out some tools. Just as I was wondering what they wanted to do, they began to pull down giant broom. APC Broom

“I feel because campaigns and elections are over, there is no use for the broom, that is why they removed it,” he narrated.

However, so many Nigerians have taken to their Twitter handles to react to broom being dismantled.